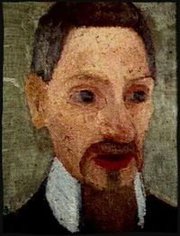 This portrait of Rainer Maria Rilke was painted by his friend the Expressionist painter, Paula Modersohn-Becker when both were adventurous idealists in their 20s. I have a particular fondness for it because it was when I working at The Women’s Press in London, in the early 1980s, that we published the first-ever monograph on Modersohn-Becker. And through that work I made my first discoveries of the exceptional writings of Rilke. Decades later my spiritual and psychological study of Rilke, In the Company of Rilke, has been published in Australia and, now, also in the United States. Yet despite the exceptional reputation of this poet, and the liberating effect his writing has on such a wide variety of readers, I am still asked (sometimes sceptically): Why Rilke? And, less often, what was it like for you, the reader as well as the writer, to spend years in the company of this man? What follows is my attempt to make some of that a little clearer.

Having been a publisher before I was a writer, and having spent a working lifetime thinking about publishing as well as writing, I think I can claim to be fairly well attuned to the enthusiasms of my publishers. It was no surprise, then, when the news that I had spent a good deal of the last four or even five years on the life and work of a poet was met with a respectful but muted response. A poet? Poetry?  A spiritual perspective…? Few worries there with how many the supermarkets may or may not take.

Despite my academic training in literature and spirituality, my training as a psychotherapist, and now decades of experience as a writer of fiction and non-fiction – plus those earlier years as an innovative publisher – I took on this study of Rilke with something resembling innocence. Yet, as I write this, I realise that’s been my experience writing each of my books that I value most. Innocence and an eagerness to know more open the way for inspiration to rise – or fall – to a fecund place within our own “poet’s mind”.

In a long professional writing lifetime where, as a working mother, I have had to be exceptionally mindful of what would make at least modest commercial as well as creative “sense”, it was an exceptional privilege to spend those years with the poetry, the man and the questions and insights his company provokes.

Rainer Maria Rilke died in 1926, aged 51. It was far too early. And he felt the loss of the decades he would miss acutely. Yet what he left makes it impossible not to return to Heidegger: “To be a poet in a destitute time means: to attend, singing, to the trace of the fugitive gods. This is why the poet in the time of the world’s night utters the holy.”