Stephanie Dowrick is the author, among other books, of Forgiveness and Other Acts of Love. This talk on the vital theme of forgiveness was recorded at the Happiness & Its Causes Conference in Sydney, in 2007. Stephanie spoke after His Holiness the Dalai Lama had spoken to a packed and highly receptive audience. The talk was recorded by ABC Radio National and played in 2007 and 2008. This is the link to the MP3 download of Stephanie Dowrick’s talk. You are welcome to comment on Stephanie Dowrick’s Facebook page where she regularly posts inspirational thoughts. You can purchase Forgiveness and Other Acts of Love at the Stephanie Dowrick Bookstore, administered by Collins/Seek. You can also buy from that same bookstore the unabridged AUDIO version of Forgiveness – or you can click on this link to purchase the unabridged MP3 version from Bolinda Audio Books. 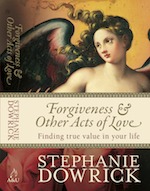