Religious belief – or its absence – is key in shaping how we will interpret the world and respond to it. It also profoundly influences how we value life as well as our own lives, and all the choices that flow from that.

This makes it surprising how relatively few contemporary memoirs are written primarily as spiritual explorations. In the last year I have read just two outstanding examples. The first was The Bread of Angels by Stephanie Saldana, an impressive young American who spent enough time in Syria to explore not only the outer culture of that increasingly troubled country but also her own inner spiritual evolution. The second, and the focus of this review, comes from Richard Holloway, a magnificent writer with a string of thoughtful books already to his credit.

A former Anglo-Catholic priest and Scottish Episcopalian Bishop of Edinburgh, Holloway is a highly praised (and sometimes pilloried) intellectual who in Leaving Alexandria offers an exceptional personal story. Better still, and while never lurking behind abstractions, this also emerges as a quite brilliant survey of the huge shake ups within Christianity over the last seven decades or so, written by someone who is, in all matters theological and institutional, post-Christian, yet is loyal still to the “miracle of pity” and to the “tiny figure of Jesus [that] can be seen on the seashore, kindling fire”.

Holloway is loyal, too, and wants to hold onto what he knows as “the poetry of religion”: unassertive, discovered in silence or in acts of tolerance or kindness far more reliably than in words; intimate, and utterly profound. This emerges in stark contrast to what Holloway calls “bad” or “noisy” religion that excuses and perpetuates gross injustices to women and homosexuals, dissidents and “heretics”. And that uses its power so often not to create peace but to disturb it.

“Bad religion can be comforting, a blanket that protects us against the chilly winds of an empty universe, but it can be dangerous too, “ Holloway writes. And later: “The congregations that were growing…were the scary ones, the ones that spoke with absolute conviction about everything. Conviction sells. …[But] I felt there was something unhealthy about an approach to Church growth that worked by persuading people they were suffering from a terminal disease called Sin for which only their Church had the cure.”

Holloway contrasts this poignantly with the “earliest days of the Jesus movement, when it consisted of…the doubters and the uncertain.”  And when compassion mattered far more than rules. However he also sees, as I do, that we live in a world of widespread moral and spiritual poverty. Many people find this unendurable, seeking extreme versions of certainty (whether assertive Christianity or insistent atheism) as their only reliable saviour.

A reforming, self-transforming bishop, explicitly anti-authoritarian and “out” on the side of women clergy, gay priests and laity, and the messy, demanding “poor”, it’s perhaps surprising that Holloway held on as long as he did. He retired at the age of 66. But of course he was, always, living an unusually rich inner life, even and perhaps especially when provoked by God’s increasing absence. This is what makes his book exceptional: that we witness the tenacity and yearning that inspired him.

Raised in a working-class town called Alexandria, in the Vale of Leven north of Glasgow, by a mother who preferred the pictures to church and a father whose unassuming habits of hard work and consideration of others shaped young Richard irrevocably, Holloway had “got” religion early. By the time he was 14 he had left home to live in a seminary that offered training in the priesthood specifically to working-class boys and men. This led him to a life different in every way from that of his family, yet his gratitude for them is matched only by the quiet, almost silent appreciation he has for his wife and children.

This is a book about faith and its meanings in one man’s life. But it is also about the centrality of human as well as divine relationships. It’s in and through those relationships that theology, as well as our favourite ideas about ourselves, must be challenged. Holloway does that. And he does it superbly.

(This review ran first in the Sydney Morning Herald, May 2012. You are welcome to comment/engage on Stephanie Dowrick’s Facebook page. You can order a copy of this and many other books, including Bread of Angels, at discount price from our on-line bookshop.) 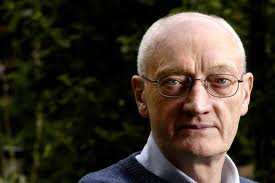