Home / Blog / Stephanie Dowrick on marriage rights for all 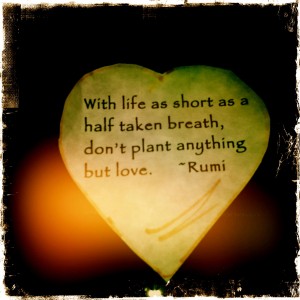 Those of you living outside Australia may know that we are currently enduring a hugely expensive, divisive, national “postal vote” survey on the question of marriage equality, which is basically about whether every adult has equal rights to commit to marriage – or not. Currently everyone over the age of 16 who is not already married can do so, whether or not they truly know one another and are in the least bit “ready”, whether they have failed 100 times, have a record of violence…or whatever. As long as the person they wish to marry is of the so-called opposite sex, up the aisle they can go.
In twenty-four nations, 1 billion people are now able to marry the person they love, whether straight, gay, queer, bi-sexual, transgender. In other words, 1 billion people are able to choose on the basis of love (we HOPE!), and willingness to commit. But not yet in Australia.
It’s a very strange thing that this is happening in a country often perceived as easy-going, permissive, inclusive. And sometimes it is, or individuals are. But Australia is also burdened with an extremely aggressive, adversarial form of masculinity. (That shocked me when I arrived here in the 1980s and it has grown worse.) It is also burdened with a small but disproportionately powerful, highly conservative group of women as well as men who (largely) deny climate change – hugely significant here in the Pacific, and on this vast continent with mineral reserves – and are also avid deniers of the social changes that include marriage equality. In many cities, towns, communities, in far too many schools and workplaces, prejudice against people on the grounds of race, sexuality, gender continue. And this unprecedented “postal vote” has allowed people to express those prejudices freely, often with extremely sad, debilitating consequences. 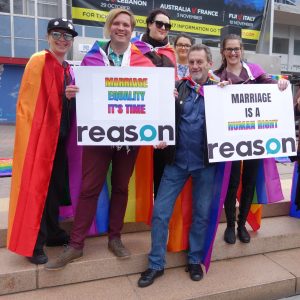 During my own lifetime as a social activist, I have seen attitudes to marriage change radically, several times over. When I was a younger woman living in London, marriage seemed to be an institution that limited women and sometimes crippled them. We spoke out against it. Those who were gay or lesbian and for whom marriage was irrelevant seemed “ahead”, not behind!
But times have changed – and I believe for the better. Marriage – with protections – is now seen differently. It has become more desirable as expectations of gender equality WITHIN marriage have also changed. People in de facto relationships do have some protections, but frequently marriage brings more. It would certainly bring far more self-evident protections for two people, committing to one another with love, who are not heterosexual. At present, there can be dreadful misunderstandings or even deliberate hurt reflecting centuries of prejudice and ignorance: not just around children, though that too, but also around access when one partner is terribly ill or dying; or where one partner needs to act on behalf of the other; or where one is inheriting from the other after a lifetime together – or where one simply wants the easy, matter of fact acknowledgement of a very specific commitment that any two loving people should be able to expect. “I’d like you to meet my partner…husband…wife…” YES!
There’s more to it than that, also. There is the public declaration of love – and then the living of that love – that seems to have had a significant renaissance in 21st-century life. Should any group of people be excluded from that right, and all the responsibilities that go with it? I don’t think so. 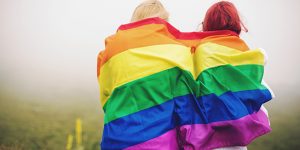 It’s very recent indeed that churches as well as legislators did all that they could to forbid marriage between people of different races. At the very same time, marital rape, child brides, domestic violence, women’s submission and “obedience” (God help us), were tolerated and, in some “traditional” quarters, rigorously defended.
I would like to see some changes to the way we think about marriage. I’d like to see a compulsory waiting period of at least six months. Where there is any history of drug or alcohol addiction, or violence of any kind, I would like to see compulsory counseling and conflict resolution mandated. I would like to see all religious celebrants, priests, ministers, OBLIGED to undertake fairly rigorous training not in “marriage counselling” only, but also in better understanding their own relationship blind spots, their own gender expectations, their own assumptions as to what marriage “should” provide and bring, or not.
I’d also like to see marriage as one particularly explicit expression of a kindness and appreciation revolution that needs to start at birth and continue throughout life. 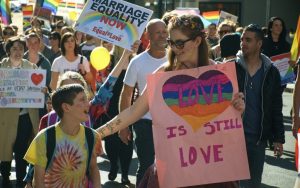 Those urging Australians to vote “NO” seem obsessed with matters sexual. But making love is about far, far more than sex! Surely it is about creating a loving environment for yourselves and others, learning from mistakes, caring and wishing the other well UNFAILINGLY, supporting your loved one to be the best person they can be, curbing your own needs at least occasionally, giving time, being fully present, listening with an open mind, enjoying each other’s company (hello?!), and feeling grateful every day that this person – with all their complexities – is in your life.
That can be achieved by those ready to grow up, to grow into love – and ready to live more lovingly whether or not they are married. A loving person loves. Marriage is one expression of that. But it is certainly not an expression that only the securely heterosexual should, can, embrace.
IT IS NOT OUR SEXUALITY THAT DETERMINES WHETHER WE ARE A LOVING, MATURE PERSON! Rather, it is our willingness to grow into our maturity, with bells on. That means caring for someone else at least as much as you care for yourself. And finding countless ways to appreciate their care for you.
If you have a chance to do so, please do vote yes. It is a human right to love and to protect that love.
And beyond the vote and in the privacy of your non-gendered, non-sexually-defined heart?! Oh please say YES, YES, YES to love – wherever it is flourishing.

Reverend Dr Stephanie Dowrick is a writer, minister, and the author of 20 books. You can follow her via her public Facebook page, where you can also leave comments that support a more loving, unconditionally inclusive view of life. You may SHARE this article via the buttons below.