(What follows is Quaker and development activist  Jane Sloane’s January 2011 eulogy at the memorial service for peace activist, Peace Prize winner, and conflict resolution writer and teacher, Stella Cornelius, founder of the Conflict Resolution Network and loved by so many. Stella died, still engaged with the activities of peace-making, aged 91.)

Stella, beloved: Appropriately, it was Nelson Mandela who said to me in Sydney, just before the 2000 Olympic Games, that if I really wanted to make a positive difference in the world that I should focus my attention on conflict resolution and citizen led change.

Soon after, Don Palmer introduced to me to Stella and that first meeting began a decade-long mentorship and friendship with her.

From the time we met, Stella made herself available to teach me the theory and practice of conflict resolution. And she encouraged me to deal with any unresolved conflicts in my own life so that I could better assist others.  She always said to me “replace every ‘but’ with an ‘and’ so that you can open up options rather than close them off”.

Later I went to live in Stella’s flat downstairs and we would role play resolving conflicts and we’d do some ‘morning work’ at breakfast.  I would take these gleanings and write them up at her beautiful desk, as collected chapters of her work and passion.

Of course our meetings were not just about how to do good work, they were about how to live a good life. Most days Stella would select a gorgeous scarf and drape it over her chair to meditate on a person or a situation. The textures and the colours of the scarf would invite reflection on this person or issue. She had such a fine aesthetic – for music, for clothes, for books, for beauty in all its forms. And a deep spirituality.

Stella encouraged me to be independent in my spirituality as much as in other aspects of my life.  She wanted me to be a well rounded individual and so one day she organised a session on how to iron shirts and sheets properly and then later, when I got a new job, she sent me off with a silver business card holder, fruit and nuts to keep my energy up and hand lotion for keeping my hands soft between meetings!

Stella never told me what to do, she was fully present in helping me consider the possibilities and ever encouraging. She would sign off her letters and emails with ‘Blessings of the Elders’ and one of her blessings was ‘Love wastefully, hold lightly, let go easily and move on gratefully.’

On a regular basis, Stella gathered groups of people together for campaigning, whether it was ‘work for all who need it’ or advocacy for an Australian Department of Peace or being present at her table at the Sydney Peace Prize where humanitarian ideas and ideals were affirmed.

In later years she was convinced that population control was a critical issue for our time. Among her many projects, Stella commissioned me to do some research on what she conceived as a citizen led Humanitarian Emergency Aid Response Team for Australia and the region, with the acronym HEART. That research led me to receiving a Churchill Fellowship after the Asian Tsunami to develop a model and now AusAID has in place much of what Stella conceived…she was someone who always seemed ahead of her time. In reaching out to the world, she had a systematic approach to systemic change. Stella once quoted to me the words of Helen Keller ‘the world is moved along not only by the mighty shoves of heroes but also by the aggregate of tiny pushes of each honest worker.’

Stella also recognised the essential loneliness of humanitarian work.  When I was working in Fiji she emailed me and said ‘I hope you’re finding all those lost pieces of yourself, darling girl’. She was always there with suggestions for self care as well as initiatives and work that might make a difference. She hoped for a beloved community… and she believed it was possible.

I remember once visiting Stella, conscious that she was 88, with some challenging health issues. She was as upbeat as ever and told me that people who are 77 and over are entitled to have a carer and she paused, with a glint in her eyes, and said triumphantly ‘I have a carer and she’s me!’  Not much earlier she’d been researching tricycles as a form of transport for herself.

The last time I saw Stella, it was to say goodbye. We both knew she did not have long left to live. It was the same day I was flying to New York to be part of an international Women’s Funding Network think tank on a global campaign to address maternal mortality and other initiatives to improve the lives of women and girls.  ‘What message should I take from you, Stella?  She concentrated and looked at me and said fiercely – we know what the problems are – we need to ask ‘who benefits?’ ‘Who benefits?’

I asked Stella what she thought would happen when she died.

(Stella, you are my compass.)

She continued, “Please remember me knowing that I love you very dearly and that love will continue beyond this life. My life here will end, our relationship won’t. I will always be taking care of you – and interfering too! <ha ha ha>.  Go well my darling girl.”

..and so, from [American poet] Mary Oliver, this poem…

like the hungry bear in autumn;
when death comes and takes all the bright coins from his purse

to buy me, and snaps the purse shut;
when death comes
like the measles-pox;

when death comes
like an iceberg between the shoulder blades,

I want to step through the door full of curiosity, wondering:
what is it going to be like, that cottage of darkness?

And therefore I look upon everything
as a brotherhood and a sisterhood,
and I look upon time as no more than an idea,
and I consider eternity as another possibility,

and I think of each life as a flower, as common
as a field daisy, and as singular,

and each name a comfortable music in the mouth
tending as all music does, toward silence,

and each body a lion of courage, and something
precious to the earth.

When it’s over, I want to say: all my life
I was a bride married to amazement.
I was the bridegroom, taking the world into my arms.

When it is over, I don’t want to wonder
if I have made of my life something particular, and real.
I don’t want to find myself sighing and frightened,
or full of argument.

I don’t want to end up simply having visited this world. 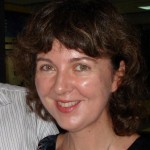 Jane Sloane is the former Executive Director of the International Women’s Development Agency. She is now Director, Communications and Stakeholders Relations, HealthWorkforce, Australia.

For more information about the continuing work of the Conflict Resolution Network visit http://www.crnhq.org/