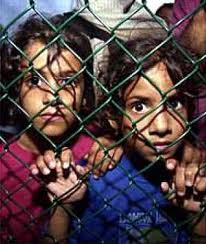 Barely a week ago, as most of us were preparing for this precious Christmas break, the media brought us news of the fate of yet more people seeking safety in Australia. This time the numbers of the dead were more startling. More disturbing. And it’s not just the numbers. The agony of the few survivors reminds us starkly how increasingly impossible it is to stand by. The media has also been telling us that you have been hesitating to compromise on more compassionate responses, within Australia or overseas. Or perhaps it’s the idea of co-operating with a government you despise that holds you back?

Yet we need you to do this. We need it, because the story of asylum seeking is part of our national story also. This is less because we are largely a nation of immigrants than because our governments – including those of your own coalition – have involved us in some of the cataclysmic events that have led to this profound disruption in countless lives.

However cautious each national government must be about who can live within its borders and who can’t, this is a global issue as pressing as any other this century. And it isn’t going away. What we are witnessing is a 21st-century tragedy with women, men and children in their hundreds of thousands needing a place to call home.

You know, as do we, that people don’t risk their lives and those of their children because they want to be free to do their late-night shopping at K-Mart. They leave everything that’s familiar and dear to them because their lives have been overtaken by fear. Even their fear of the deadly travel to unwelcoming countries is self-evidently less than their fear of what “home” has become.

Mr Abbott, we are part of that story. Asylum seekers – in contrast with the visa over-stayers who arrive by plane – are largely fleeing social violence, including war. In some of those horrors, Australia is complicit. Our governments have made us complicit.

Rather than limiting our national involvement to aid and peace-keeping forces, or to more intelligently supporting global and local efforts to resolve complex social divisions peacefully, our country has instead participated in dangerously isolating Iran, and in actively participating in wars in Iraq and Afghanistan that have displaced countless people whose needs for respect, safety and shelter are probably very much like yours and mine.

Some people call those wars shameful. I do. But whatever we call them, they have inarguably left a generation with virtually no experience of what it means to think of home or country as a place of safety.

As we continue to gather around laden tables, you might also agree that we have failed adequately to meet the global challenges faced by those fleeing the violence of hunger, particularly from Africa. Far fewer of those refugees or asylum seekers think of Australia as a possible haven. But they are also part of our story.

Living marginalized and in poverty, with all the dangers to health, spirit and life that such poverty implies, they must endure the now-familiar contempt of millions who do have a place to return to at the end of their day.

Like many of the asylum seekers looking towards Australia, those fleeing Africa are largely funded by their families out of a collective purse. Their fear of disappointing those left behind can only be imagined.

Like many coming towards Australia in those perilously inadequate boats, they were, presumably, meant to carry the hopes of those left behind. How could they easily admit that this journey has taken them only to more misery? Or that the so-called promised lands of plenty offer people like them neither safety nor hope?

Hope, as you would know, is a currency vital to the human spirit. Western governments – and opposition parties – have entrenched policies that seek to deflect asylum seekers by withdrawing most meaningful notions of “asylum”. And by denying hope. That the world’s asylum seekers nevertheless continue to hope is testimony of sorts to the human spirit. It is also heartbreaking.

Mr Abbott, I am just one voice among many thousands saying that the so-called political “deadlock” on this matter is more than deadly. Again and again I am hearing from other Australians that there is no time to waste. Many of us see this as a global issue in which Australia’s “problem” is proportionately less than that of almost any other wealthy nation. We see this as a vital local issue too, where our national identity as people of a fair go hangs in a precarious balance.

Some might argue that a lack of co-operation between yourself and the Prime Minister and her government is literally killing people. However you interpret it, there has to be a better way: a better way to understand the causes of this vast 21st-century upheaval. And a far better way to address with decency and compassion its most urgent effects.

(A slightly shorter version of this open letter appears in the Sydney Morning Herald, 27 December 2011, and on the on-line National Times where you can add a comment.  You can also “Like” and comment on Stephanie Dowrick’s Facebook page.)